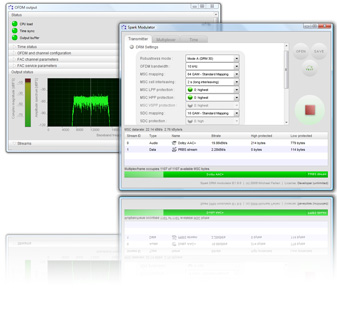 Since the first hour of radio broadcast almost all medium wave (MW) and long wave (LW) transmitters use amplitude modulation (AM) for the transmission of audio signals. The modulation scheme as well as the small channel bandwith of 10 kHz limits the audio quality which is the reason why commonly speech signals are transmitted in these bands. In the end of 2003 the European Telecommunications Standards Institute (ETSI) published the specification for digial radio broadcast at 30 MHz using a multi carrier technique called OFDM. The system was named Digital Radio Mondiale, abbreviated DRM. Concerning the channel bandwidth of 10 kHz the datarate of the streamed media is limited to approx. 35 kBit/s for a single channel and 72 kBit/s when using two channels. Although the bitrate is not very high the audio quality of the streams reaches or exceeds the quality of FM mono transmissions. The advanced audio coding standard (AAC) combined with SBR and parametric stereo provide high audio quality at very low bitrates (e.g. 22 kBit/s). Beside AAC the DRM standard defines the HVXC and CELP codec to be used for transmitting speech signals at 4 kBit/s or less. Streaming raw data for image slideshows, HTML pages, etc. is also allowed by the DRM standard.

The Fast Access Channel is used by the receiver to obtain information about the OFDM signal properties and the SDC/MSC configuration. For proper synchronisation and SDC/MSC interpretation a receiver reads the spectrum occupancy, carrier spacing and the QAM resolution information in the FAC datablock. The channel parameters, which contain the OFDM signal information, are transmitted every 400ms together with a block of service parameters. The service parameters may vary in a defined order according to the number of services used.
The fixed coderate of 0.6 and the usage of 4 QAM encoding make the FAC very error robust. The complex QAM-cells are mapped bandwidth independently on 65 fixed carrier positions within a transmission frame. Hence, the bandwidth of the FAC is limited to 72 bits per transmission frame.

The SDC contains the information needed for MSC decoding, like the multiplex frame structure, as well as other additional information. These are transferred in a sequential list of data entities. Every data entity type has a unique number which defines its data structure. The channel coder uses standard mapping with either 4 or 16 QAM resolution and a overall code rate of 0.5. As well as the FAC, the SDC is EEP encoded and has got no high protected part.

The MSC encodes the multiplex frame generated by the multiplexer and uses either 16 or 64 QAM with different mapping schemes. One can choose between standard mapping, symmetrical hierarchical or mixed hierarchical mapping whereas only the standard mapping allowes 16 QAM. If hierarchical modulation is used, every bit of a hierarchical multiplex frame is mapped on one complex cell quadrant which allowes a 4 QAM decoding of the MSC cells if the error rate is too high. For making the MSC even more error robust it is possible to use UEP and split the multiplex frame in a higher or lower protected data part. Usually the higher protected part is encoded using a higher code rate which adds more redundancy and hence, decreases the propability of bit errors in bad transmission scenarios. Cell interleaving of either 2s (long) or 400ms (short) additionally protects the MSC data against error bursts.

The procedure of cell mapping is defined by assinging an encoded bitsequence on a two dimensional coordinate system. These so called QAM cells are inserted into different OFDM symbols in a well known order. Aside from those, an OFDM symbol contains reference cells of fixed amplitude and phase which are called pilot cells. The receiver uses those references for channel eastimation, equalisation and signal synchronisation. There are three different types of pilot cells generated by the pilot generator: time, gain and frequency references. These cells are scattered within a transmission frame in time and frequency direction.
When an OFDM symbol is completly filled with QAM cells it has to be transformed into the time domain using a DFT. Before this signal can be transmitted it is necessary to append a guard interval.

The OFDM output signal is described by:

The MDI protocol allows a distanced spatial connection between the DRM content server and baseband modulator (MDI receiver) over ethernet. Hence, the analog baseband signal can be generated very close to the transmitter and there's no need for long-distance HF connections which could add a lot of noise to the output signal. The precoded bits of FAC, SDC and MSC as well as some special information for the modulator are send in a DCP-PFT packet stream [3]. If ethernet is used as physical medium the used protocol on layer 4 can either be TCP or UDP. The use of multicast allows to serve different MDI clients in one LAN with MDI packets.